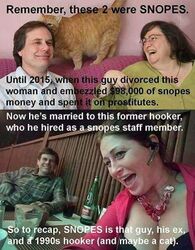 While I'd far rather Snopes was doing the service they did earlier on, and not hiring biased editors to write partisan fact checks, and losing money doing it, leaving the fake news to NYT, CNN and WaPo to spin. But they are learning the hard way that if you alienate half your users, then you cut down on your revenues. [10]

The point isn't that snopes is untrustworthy, or partisan: they are, but not much worse than most places... but that's not a high bar. Critical thinking (skepticism) is required on every piece.

It isn't that you shouldn't trust them just because they hire biased partisan lefties as editors: they do, but some of their work on many or even most topics is still OK. But that doesn't change the places/topics where they fall way short. And partisan lefties will filter future hires through an SJW lens, demanding "cultural fit" (destroying intellectual diversity) and making them decay over time. And the talent pool coming out of J-school, or Newspapers, was already biased to begin with. So they don't deserve the authority they have in the present, and that will only get worse over time.

The problem is that as their standards have dropped, their responsibilities and impact have increased. Google, Facebook and others, are using them to filter junk news from the real news, or effect rankings -- and Snopes just doesn't have or deserve the chops for that kind of stuff. Once others are using their worst articles as excuses to warn, filter, block, demonitize, promote, or ban people -- that's an issue. If you use 1 leftist source and 9 non-partisan ones to "fact check" blindly, you'll still get a leftward bias. When you use 9 leftist ones and one non-partisan, it's worse. So the problem is that linking and trusting snopes is an "appeal to authority" or "appeal to popularity" fallacy. Just because most of Snopes articles aren't complete crap, doesn't mean the one you're sourcing isn't. Thus while I'm fine with them as a casual fact check site, I'm terrified of them as the thought-police for the Internet.

Overall, they're hit and miss, and slowly getting worse over time. When they're on, they're not bad. When they are off, they don't always fix things in above board ways that would fit good journalistic standards. Many fair articles don't make the completely hacky and unfair ones any more legitimate: skepticism is required. You can be a stand up guy 99% of the time, but if you rape one goat... well, we have caught Snopes being a goat-defiler on too many occasions to be a trustworthy source.

Retrieved from "https://igeek.mywikis.wiki/w/index.php?title=Snopes&oldid=17930"
Cookies help us deliver our services. By using our services, you agree to our use of cookies.
Categories:
This page was last edited on 13 February 2022, at 21:32.
This page has been accessed 14 times.
Privacy policy
About iGeek
Disclaimers
Mobile view
DMCA
Return to top