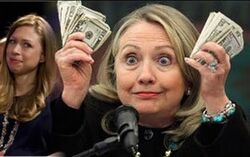 Without any experience, as a first time Cattle Futures trader (and wife of Governor), she gets a 9,987% return on investment in a few months, after, according to her, "reading the Wall Street Journal" (a paper that doesn't talk about Cattle Futures). With results like that, she decides to never trade stocks/commodities again. Suspicious?

So we're to believe that under the guidance of a few "friends" (her account being run by a lawyer for state poultry interests, through a disreputable broker) she turns $6,300 investment into $100K (a nice even number) in a few months, with shoddy and lost records, questionable trades, not enough money in her account to cover some of the $1.5M positions she bought/sold in the same day (anyone else would have had margin calls), and other eyebrow raising anomalies. Then her two partners in this (Bone and Refco) were suspended and fined respectively for improper records keeping. But nothing to see here, move along -- we're not supposed to question her integrity, or think that this might have been a payoff?

Of course the fact checkers (Politifact, FactCheck, Snopes) choose not to check these facts, because they don't reflect well on Hillary -- while Republicans and others mention this one fairly often. Do you think such an obvious example of payoffs is "not newsworthy", or a lie of omission?

Retrieved from "https://igeek.mywikis.wiki/w/index.php?title=Hillary_Clinton/Cattlegate:_Futures_Trading_Miracle_(1978)&oldid=44603"
Cookies help us deliver our services. By using our services, you agree to our use of cookies.
Categories:
This page was last edited on 23 November 2022, at 20:10.
This page has been accessed 13 times.
Privacy policy
About iGeek
Disclaimers
Mobile view
DMCA
Return to top