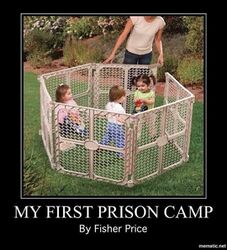 The idea that criminals shouldn't be separated from kids is absurd. Under the Democrat's reasoning, for domestic crime, it is fine to separate families. But for foreign invaders and perpetrators should get special exceptions. But a nation without laws (or subjective laws) is no longer a valid nation. And a media that omits context and biases their stories, as NYT and NYMag did on this one, are no longer journalists.

In 1997, the federal government made an agreement in a case called the Flores Settlement (part of the Reno v. Flores case), not to keep unaccompanied illegal immigrant children in custody beyond twenty days. This got extended to accompanied minors by the 9th circuit, which ruled that the government either had to release whole families, or that the government had to separate parents from children. [1].

There was so much FakeNews about this topic, that I had to break it into a whole other article: 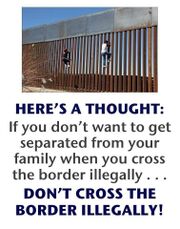 So this wasn't a Trump administration invention.... those claiming this is a Trump policy, or new, are either fools or liars. This was the consequences of Democrats refusing to do more for border protection, and the 9th Circuit tying the hands of the INS. But remember, if Democrats had done what they promised in 1987 (and many times since), and helped seal the border, instead of obstructing those efforts, then this would be a non-fight, and kids would not be getting separated from their families. Of course most Democrats are biologically incapable of admitting truths or mistakes by their side, so this will only piss them off (like most facts do). But if you care about the facts, you repeat them, even when they're unpopular.

America can not take the influx of people that would come here if they could. Period. Fact. The only question is should we reward illegal line-jumping (the Democrats plan), or should we reward those that follow the rules by making those cutting in line, wait their turn at least (the Republicans plan)? That's fundamentally what this fight is about. That and short versus long term thinking. Should we be compassionate in the short term or long term. (Help kids now, and get more of them crossing the border and being exploited. Or enforcing our border laws, discouraging illegal coyote's and human trafficking). It helps to remember the basics:

The reason Trump has to address this, is because of the failure of Democrats policies. And there's a reason that no democrat has offered a solution for this problem: because they don't have any, they want to distract with sob stories. But I ask them things like, "Do you think illegals are stupid? Y/N". If Y, then you're probably racist. If N, then you know they're smart enough to exploit holes in the system. And there's no doubt putting an exception that says, "here's the immigration laws, unless you bring in kids"... would be a glaring hole that would be exploited. In fact it was being exploited, widely. And catch-and-release was resulting in millions disappearing in our border, and breaking the law.

In the end, the real question is do you agree that there should be consequences for breaking the law? Y/N

In the end, this debate gets to the core differences between Democrats and Republicans. Democrats are the “Why can’t we only eat candy?”, kids in a candy-store party (as long as someone else is paying for the candy). They are demonstrating short-term thinking and vilifying any authority who dares to imply that punishing lawbreakers is better than the alternative. Republicans are being the long-term thinking Daddy party, and saying, "because it's bad for you" and trying to prevent more catastrophe and abuse of minorities, but that forces us to allow kids to be separated from their parents and vet which parents are honest, which families are real or not, and not reward everyone who users their kids as human shields to circumvent immigration law... exactly like happened under Democrat administrations, when no Democrats seemed to care about this issue.

If you want to argue about whether the kids are being properly cared for, or whether the process is fast enough? Fine. Make that case, and I might agree with you. But that's not the argument most are making. They're arguing that a nation should have no right to imprison lawbreakers, or protect kids by not locking them up with their felon parents (and whoever was netted with them). And that's just stupid and racist. It pretends that illegal immigrants are too stupid to use kids as pawns (just like the Democrats do), but evidence shows they already are. [2] Democrats are either too stupid to understand that they are, or they're dishonest and using them as pawns to get what they want without admitting it: open borders. Face it, if the Democrats cared, they would have addressed this when they had super-majorities in all the houses back in 2009... instead this problem grew under Obama, and they were silent. The facilities being used are the same facilities Obama used (and the Democrats had no problem with), only they're less crowded and better managed now. It only became an issue when Republicans took the Presidency.

The legislature can fix this law at any time. The Democrats have been obstructing those chances: cries of Holocaust or Internment camps and other absurdities, can't help. They can only polarize the informed against the Democrats, and those lies can only work against fixing the solution. Which is likely what the Democrats want. They want a campaign issue for 2018, and lies pretending this is a new problem, Trump's fault, and other exaggerations is their ways to exploit children as political pawns to win an election. If the Democrats really cared, they wouldn't throw out all this invective, they'd come to the table and negotiate something that Republicans would happily fix. Instead Schumer and Pelosi are blocking offers to resolve it (they want to make it hard to fix). If the Democrats worked to fix it, they couldn't get elected by finger-pointing and blaming the Republicans for the problem.

Retrieved from "https://igeek.mywikis.wiki/w/index.php?title=Cagegate&oldid=29640"
Cookies help us deliver our services. By using our services, you agree to our use of cookies.
Categories:
This page was last edited on 5 July 2022, at 00:59.
This page has been accessed 9 times.
Privacy policy
About iGeek
Disclaimers
Mobile view
DMCA
Return to top