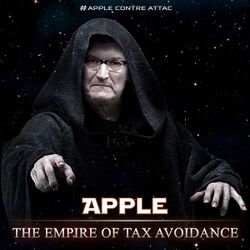 Don't anthropomorphize companies, they hate that. The same goes for dogs, computers, and some people. Apple is neither good nor bad: it is a group of people making products and trying to get returns for investors and customers. That behavior can be good or bad (or a bit of both), depending on how they're doing it.

Sometimes the leadership can be good or bad, or making bad decisions. But mostly, I roll eye's when I see things that vilify the leadership for things that they have a responsibility to do. Tim Cook isn't evil for paying as few taxes as legally possible, and using that money to employ people and create great products -- he would be evil/negligent if he didn't do that, and wasted investors/employees/companies money on things he didn't have to.

Retrieved from "https://igeek.mywikis.wiki/w/index.php?title=Apple&oldid=45898"
Cookies help us deliver our services. By using our services, you agree to our use of cookies.
Categories:
This page was last edited on 1 January 2023, at 19:24.
This page has been accessed 116 times.
Privacy policy
About iGeek
Disclaimers
Mobile view
DMCA
Return to top