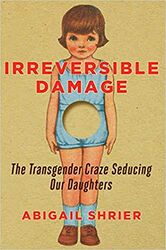 Since human biology and fundamental psychology don't suddenly change like that, what were the likely causes?

The likely answers are a shock to no one: impressionable girls who are struggling at social interaction can find the ultimate ice-breaker and social riches ("Special" social status), based on how much gender change and body mutilation they would go through. Incentivized gender dysphoria.

This was mercilessly attacked as transphobic, not based on data, but based on feelings and the threats that these truths might hurt transgender kids. And that's true, but irrelevant.

This is the same as eating disorders and self-harm: both trended up (and down) at various times and are sort of both real maladies and a mass psychosis brought on by peer pressure.

The data is based on a Lisa Littman study (from Brown University), that documented this Rapid-onset gender dysphoria. It wasn't a controversy in the science, it was peer-reviewed, published and everyone thought the methodology of interviewing a couple of hundred parents of children with gender dysphoria (85% of whom were supportive of LGBTQ rights, etc), and noting the trends, was a good way to look for patterns.

Of course, she had no challenges to her bonafides and the study beforehand... but once she touched this hot button with data -- the activists attacked. The science didn't show what they wanted -- it showed:

This data is real.

So the science (observation) is not controversial. But to the political activists, it was HUGELY controversial! And since attacking the observations wasn't easy (there are no better studies showing contra-indicative results), they attacked Lisa Littman, Brown University (which apologized for publishing the truth), and anyone who dares mention this study or the observations. Without being able to refute it, other than a few anecdotes.

Planned Parenthood is of course supporting the idea that underage girls scan go in and get a doctors note from them to have their breasts removed or go through hormone therapy or other transitions, often without parental notification or approval. All based on self-diagnosis of the mentally ill.

The left will wrap themselves in the flag of "Civil Right" and LGBT-Jingoism. But if they really cared about the kids, they'd care about the outcomes of those who go through transition. They'd care to put checks and balances in place to prevent exploitation of the mentally ill to cause Irreversible Damage to their bodies. They'd be outraged by each and every person that was mutilated (at their own request) and later regretted it, as they found out the real problems were elsewhere.

Again, none of this is to deny that there's a very small percentage of people that have severe pathological Gender Dysphoria. But it is to recognize that impressionable children (especially socially influenceable girls) could be some percentage of the HUGE upward spike in transitioning kids,or upticks in transgenderism rates that belie science and common sense.

Retrieved from "https://igeek.mywikis.wiki/w/index.php?title=Irreversible_Damage&oldid=45464"
Cookies help us deliver our services. By using our services, you agree to our use of cookies.
Categories:
This page was last edited on 17 December 2022, at 18:57.
This page has been accessed 35 times.
Privacy policy
About iGeek
Disclaimers
Mobile view
DMCA
Return to top