The Subtle Art of Not Giving a Fuck 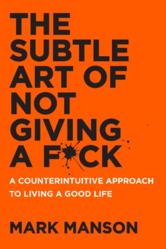 If you set a goal like "I want to lose 50 lbs.", the process is that you're setting yourself up for failure. The whole time they're achieving their goal, they're upset because they haven't hit their goal. The voice in the head says, "not there yet... not there yet... I'm failing". Then when they finally do hit a goal, after a tough journey, they're like, "Oh, congrats to me... now what?"

Then they have to set another goal that they're failing at until they get there and get an instant of satisfaction, then set another goal. Etc... it's a lot of failure for a few moments of let-down/success. They're addicted to failure because that's been the process/training they've given themselves.

The better goals are process goals that you're succeeding at daily. "I'm going to wake up today, and succeed at following a plan"... "I'm going to do something nice for someone else, each day". Things, where you can wallow in the little successes of the journey, and let the destinations, will come to you. Then you're programming yourself with the process.

A quick spoiler, but one of the key takeaways of the book was the story about two "failed" Rockstars and how they dealt with it.

The lessons were that Pete Best was able to set a better goal or adapt to changing goals. While Mustaine was too focused on the wrong goal to be happy with the goals he had achieved or exceeded.

So I hope you live in the moment, enjoy right now, and recognize that today you're doing something good. Set the process goals and wallow in them, and the daily successes by following them. And if you keep doing that, you'll win, whether you hit some arbitrary/made-up goal or not.

Retrieved from "https://igeek.mywikis.wiki/w/index.php?title=The_Subtle_Art_of_Not_Giving_a_Fuck&oldid=44119"
Cookies help us deliver our services. By using our services, you agree to our use of cookies.
Categories:
This page was last edited on 12 November 2022, at 23:46.
This page has been accessed 21 times.
Privacy policy
About iGeek
Disclaimers
Mobile view
DMCA
Return to top