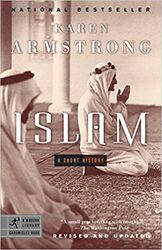 Islam: A Short History begins with the flight of Muhammad and his family from Medina in the seventh century and the subsequent founding of the first mosques. It's an origins story that meanders across numerous imams and Islamic leaders, explaining how she believes they thought, and what they did, and recounts the origins of the split between Shii and Sunni Muslims (and the emergence of Sufi mysticism); the spread of Islam throughout North Africa, the Levant, and Asia; the flowering of imperial Islam in the fourteenth and fifteenth centuries into the world's greatest and most sophisticated power; and the origins and impact of revolutionary Islam.

She's definitely trying to spin a somewhat pro and victims view of Islam, and whitewashes some of the less savory parts -- but it's good to get things from multiple sides. And in trying to dispel some of the myths, she actually exposes some of the fundamental problems with Islam, for those not just listening to her words but reading deeper. There are many factions that tried to start out with good ideas but devolved into what they became. So things like how for 1,000 years the Muslims tolerated the Jews, and how it does not encourage convert others (contra, Christianity), eventually devolved into what it is today. Or how their foundation on Social Justice and a more communal nature, lead to the west out innovating them via capitalism, and the Islamic resentments towards authority and bureaucracy made it harder for them to have centralized governments. Or how Islam broke tribalism of the Arab world, and replaced it with the tribalism and "us versus them" of the religion towards non Muslims. Or how they don't believe in a separation of church and state, government is and should be (in their minds) about further God's will -- which doesn't mean converting to Islam, but if you're not a Muslim, you shouldn't get a say in their governments (in their minds). There's a lot to think about, if you start contrasting their beliefs, compared to traditional western thought.

Retrieved from "https://igeek.mywikis.wiki/w/index.php?title=Islam:_A_Short_History&oldid=14746"
Cookies help us deliver our services. By using our services, you agree to our use of cookies.
Categories:
This page was last edited on 4 December 2021, at 16:19.
This page has been accessed 14 times.
Privacy policy
About iGeek
Disclaimers
Mobile view
DMCA
Return to top