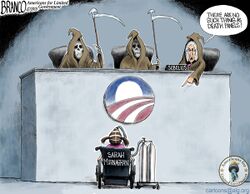 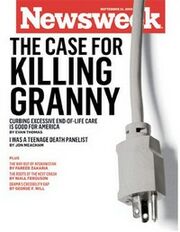 The Dems put in a fraud that they knew would never be implemented called the IPAB (Independent Payment Advisory Board), which the republicans labeled the "death panel". The IPAB it was a panel of 15 who would decide unilaterally on what life-saving treatments would be covered or not. Since they were denying you service to what the democrats called a right, and denying those services would kill you, the death panel was an unfriendly but not untrue name.

The Democrats wanted it both ways, they claimed "death panels" (and the IPAB) didn't exist (it did), but then they claimed it did exist (when it wasn't yet implemented) when it came to imaginary cost savings that it would incur by eliminating expensive treatments. It was a double flim-flam. The rational (non-democrats) knew that it would never do what it was designed to do (because politicians didn't want to get caught empowering a death panel), which meant the cost savings claimed by the Democrats was a fraud all along. And thus the losses by cutting it, are also a fraud. But it was in the ACA/Law, so once again the Republicans were right and the Democrats and their media were lying all along.

The most insulting thing is that congress is not supposed to be able to do this under the law (create agencies like the IPAB) and defer their legaslative responsibilities to create law (regulations) to another group. It's called the nondelegation doctrine, not that progressives on the court or legislature have ever paid attention to it... never let the law of the land get in the way of a political agenda.

But anyways, this the Death Panels are dead. Which is impressive if you're a Democrat, as they claimed they never existed IRL, unless you were talking about imaginary accounting tricks, where they accounted for it. And while I'm not completely against the spirit of it (having some agency to decide what is effective healthcare or not), the political implementation was never ever going to work.

Every media agency, political pundit, and politician that claimed either there was no death panels, or that we would see the cost savings from having one, is proven a liar, fool or polemic. We just call them Democrats or Politicians: it's all the same thing.

Retrieved from "https://igeek.mywikis.wiki/w/index.php?title=Death_Panels&oldid=44471"
Cookies help us deliver our services. By using our services, you agree to our use of cookies.
Categories:
This page was last edited on 18 November 2022, at 21:33.
This page has been accessed 23 times.
Privacy policy
About iGeek
Disclaimers
Mobile view
DMCA
Return to top