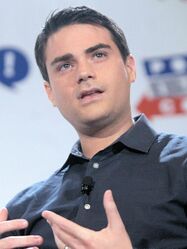 He is despised and maligned by the far left, because he so intellectually outclasses them (in class, quality of argument, and factual depth). They call him (an Orthodox Jew) a Nazi, and have maligned his reputation amongst the ignorant. But if you actually listen to him, or read his stuff, he has incredible points -- even the things I disagree with him on are very well thought out and reasoned (and I do disagree with him, at least in degrees, on quite a few things: but his arguments are still stellar). And he's been doing it so long, the speed of his wit and depth/breadth of his knowledge on issues is stunning to watch. Whenever I get full of myself, I just want a Q&A with him, and it puts me back in my place.

Because of his conservative views, and once working for Brietbart, he's often called a Nazi or alt-right. (To the ignorant, those are the same thing). Actually, he is the anti-Alt-Right: mature and restrained. Shapiro was also a bit never Trump (before the election), now is not a Trump supporter -- but willing to begrudgingly give him credit. (His dislike of Trump's style seeps into some of Shapiro's stuff and comes across as sounding a little too lefty or apologetic). Which sets off the alt-right (who are generally fans because of Trump's style to give back to the left, the same shit the left does to the right). So while there's a few views they align on (like their contempt of SJW's, Radical Feminism, etc), the alt-right doesn't like him at all: he's way too straight-laced, religious and civil -- and they are meme-throwing kids mostly mocking the system (originally), along with some alienated adults with white-separatist or nationalist tendencies (more so now), and a few real bad eggs amongst them (that the media plays off as the whole movement). But the media would have called Mitt Romney alt-right, if that term had been around when he ran for President. But to the alt-right, Shapiro is a 'cuck', 'pussy' and 'kike'. And anyone that says Shapiro is alt-right or a Nazi can be marked as a useless human being (around issues that touch politics or current events).

But if you want to see real venom, you don't have to look at the occasional anti-semite in the alt-right, you can look at the mainstream left, like Joshua Topolsky.

Christina Sommers (Factual Feminist) retorted to this tweet by Joshua, asking "Is there a way to delete other people’s tweets?" -- which kind of sums it up. And this tweet is not an anomaly. I've heard NPR refer to Shapiro, Milo, or others as alt-right. But then if the far-left news outlets cared about the truth, I'd have nothing to complain about. Fortunately, I can complain about Twitter-Hypocrisy. Twitter would delete the account of any conservative who retweeted anything 1/10th that offensive in a nanosecond (no second chances). But since it was an attack against one of the more moderate voices on the right, by a guy that was involved in far-left sites like Vox, the account is still up there. (Though he did delete the tweet: no apology).

Retrieved from "https://igeek.mywikis.wiki/w/index.php?title=Ben_Shapiro&oldid=43903"
Cookies help us deliver our services. By using our services, you agree to our use of cookies.
Categories:
This page was last edited on 12 November 2022, at 00:56.
This page has been accessed 9 times.
Privacy policy
About iGeek
Disclaimers
Mobile view
DMCA
Return to top