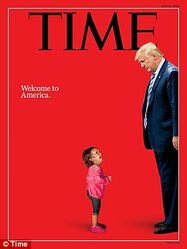 Of course the whole thing is a journalistic lie: it was a chopped up photo (Trump was not looking at the girl, the girl was not being separated from her mom, and the article was littered with half-truths at best). Things like how Trump was instilling a new policy (that has been around since 1997 and before, off and on), to separate kids from their parents as the law requires (only it doesn't unless they're breaking the law), and that had been fixed by an exec order long before the Time Article went to print. But other than that.

The actual photo was of a criminal Honduran mom, who had paid $6,000 a human traffickers to illegally help her kidnap her daughter (take the husbands daughter against his will) and smuggle them both into America, after the Mom had abandoned her husband and 3 of her remaining children. Also after she had already been deported once before (2013) for illegally entering the country. Time didn't feel any of those facts were worthy of adding to their fictional propaganda piece. Oh and the little girl was not crying because she was being "ripped from her mother's arms," as they implied, she was crying because she was a tired and thirsty 2 year old, fatigued because of the life risking journey she had been dragged on, by a mom that had been lured into taking the journey based on her assumption that the failed Obama's "catch-and-release" policy was still in place. (Catch and release was Obama's policy where illegal aliens and other felons, caught breaking the law, were let go anyways, on the promise that they would show up later. Even though, virtually none ever did. Instead many went on to join gangs like MS-13, and murder and rape people).

Of course human dingleberries (Hollywood Celebrities), like J-Lo went on to rage about how bad this was, long after it had been corrected, because the liberal outrage machine had told her to "Follow the Leader", so she did... without thinking, or fact checking. And of course it was a British Paper (DailyMail) that broke the story about how Time got it wrong. The crack journalists at NYT or WaPo and other anti-American outlets weren't interested in this blatant journalistic abuse of public trust, or what the truth actually was.

But other than getting the story completely wrong, and being corrected by her father, Honduran Government and U.S. officials on a completely dishonest and fictitious picture, when caught, Time tried to make excuses and distractions for their erroneous leftist propaganda, and imply that while the picture was bullshit, that was OK because it captured "the spirit of the situation", assuming you are an ignorant, over-emotional, far-lefty that had no clue as to what was actually going on, or why. (In other words, their editorial staff and audience).

The only they they got right was the "Welcome to America" headline -- where the rules are made up, and the facts don't matter.... to journalists. When far-left USA Today corrects you, and calls it a "lie" or a "trick", you know you've gone out there. Of course USA Today, didn't offer their readers the context of other outlets like the USA Today, NYT or WaPo spinning it the same way, or that might qualify them for honest journalism. But baby steps, admitting that your side made a mistake, is a big one for USA Today.

Retrieved from "https://igeek.mywikis.wiki/w/index.php?title=2018.06.21_Immigration_Girl&oldid=44711"
Cookies help us deliver our services. By using our services, you agree to our use of cookies.
Categories:
This page was last edited on 25 November 2022, at 04:18.
This page has been accessed 7 times.
Privacy policy
About iGeek
Disclaimers
Mobile view
DMCA
Return to top